Interview with the Band REOG

CV: Please introduce yourself, your band and give us a brief bio the band’s discography/videography.
REOG: We are REOG (ree-ohg) out of Los Angeles, CA. The band has been going for a little while now, we were cofounded by Sammy but the group as it is now goes back about 5-6 years with Richard and Ralph and 2 with Jon. We play a big stage arena type of heavy metal…kind of a hard edge glam in rough comparison to Motley Crue or Skid Row, but not necessarily in the image or sound of those bands.

We released two albums with the original band “For the Flowers” and “Final Tears Falling.” We also put out a demo EP, “Daily Grind,” with new songs, some of which we often play live, about a year before things shut down with COVID.

CV: Given so many major changes over the last decade, do you believe the music industry is a practicable and stable enough environment for new artists to even consider making it a valid career choice? Can a level of sustainable success really be achieved in your opinion?
REOG: It is definitely difficult to go into music as an original band intending immediately to make it a full time thing…we all have separate careers outside REOG so are ourselves also trying to figure this out. But there are new bands that are breaking through to some level of success. The avenues that bands were able to use in past like finding an agent or label that will sign you and support you or building an audience from constant gigging are much more difficult, but there are also new opportunities…technology allows us to self manage, self record, use internet platforms to build a brand. But people starting out need to realize also that they need to be much more than a good musician to succeed, you need a variety of skills in producing content and in business and marketing. 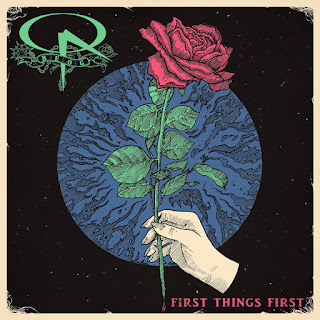 CV: What do you see as the biggest change in the music industry since you first started out?
REOG: The extent to which bands now start out needing to build their own complete brand themselves and sometimes build their own revenue streams without much thought about signing with a label on a traditional record deal. The process leading to this started well before we started out though.

CV: How do you see your music separating itself from your peers and avoiding just being another cog in the wheel?
REOG: First of all, we want to be much more than recording musicians. We are trying to build an overall performance that people feel excited to check out and will remember, which is really lost in a time when there are many great musicians producing music. Musically we have good songs with catchy melodies and the raw energy of punk rock in a metal sound, great guitar solos and appeal to a wide variety rock and metal folks. And obviously we aren't the first or only one, but there really is not many new bands right now playing this sort of arena rock and less so in heavy metal specifically, especially in the US.

CV: Has the industry’s many changes affected how you write music? Has it influenced your songwriting style in any drastic form?
REOG: Not really. Right now we play a style of music based largely on what we enjoy playing. We believe there is a market for what we are doing and have never really had conversations about how we might change the songs to fit what the industry is doing.

CV: Has digital technology led the way for almost anyone to be a musical artist in your opinion?REOG: With or without technology anyone can pick up a guitar and play and there are a lot of people out there producing music or other content, for better or worse. If we are talking about relying on software to sound good, there is some of that there, like a lot of music has heavy processing that takes away from the importance of individual performance, and affordable software is available. But use of technology can also be an art in itself, especially in genres a little outside what we are doing. In the end it always becomes about taking whatever tools are available to create a product that stands out from everything else.

CV: Has music in general been broken into too many sub-genres? Why do think there are so many classifications of music types? Can this be confusing for an artist who is looking to build a brand? As well, can it be confusing for the fans?
REOG: Yes and no. Like REOG would be comfortable being called rock, hard rock, heavy metal, classic metal, glam rock/metal, power metal, even thrash metal etc, without even getting into some of the silly too specific subgenre names people apply to bandsl…we think we fit in any of those genres/sub-genres and people into any of those can get into our music. But it becomes difficult if forced to pick one of those and is a challenge to not put yourself in a place where people who might like what you do never give you a listen because you are not “their” genre. Like earlier we called ourselves hard edge glam metal, but at the risk someone will move right past because they don't like Poison. Or you sometimes get gatekeepers of so called genre purity, like we even submitted to another metal publication once but were told "they don't cover pop music," LOL.


Unless a band is trying to capture the sound of a genre with a scene they can get into, probably they don't want to be limited to such a label, but at the same time you can understand that with all the content out there, potential fans would want to avoid wasting time on bands outside their taste. Actually, the biggest thing we would love to see more is bands at shows selected more for mutual compatibility, where someone checking out a band they already like can count on seeing 2 or 3 other bands they might be into, based on the promoters actually listening to the music, not just by having a similar genre.

CV: How would you define “iconic” when it comes to being an artist or musician? What do you think makes an artist iconic?
REOG: Someone who becomes a brand that stands out enough from everyone else to be remembered longer than their time active.

CV: Who would you consider to be a modern day “rock star?” And is being a “rock star” something to aspire to?

REOG: Not sure any recent name comes to mind…it would be more in pop music than in rock or metal. There really are two types. Like there are individuals who attract mainstream attention based on their personality or what they do offstage. But also, as rock was forming, there were certain people or bands that really defined and created what it was about either musically or stylistically. Bands like Iron Maiden or Rush don’t really fit into the media personality type, but their impact is so huge there is little question of their "rock star" status in the eyes of millions.


Today, people have a much harder time standing out and truly doing something that hasn't been done. So while there are rock and metal bands recently that have enjoyed a lot of success, the true level of stardom attained by bands 30-40 years ago may not be truly attainable.

We are really just trying to make and play music influenced by styles we love and put out an original product we believe in, see where it goes from there. Also anyone who gets up on stage and is able to energize a crowd is a rock star in our book, at least in that time and place.

CV: Does music need to have a message to convey to the world for it to be worth listening to in your opinion?
REOG: Other than critics, most people usually listen to rock and metal music more for the music than the lyrics, so no. There is a lot of music we all listen to with all different lyrical content, sometimes that we may not agree with. There are a lot of things people can try to get from music, like the Beatles built a fairly nice career, but Paul's lyrics especially, while brilliant, they are more whimsical day in the life kind of deal than having a particularly strong message. With REOG, we try to maintain a positive message people can relate to, hope a couple people might find it worth a listen.

CV: What's next for the band? What can fans expect to see coming?
REOG: We are working on a new recording that should come out in the next 6-12 months. It actually is mostly content we have recorded previously, just never released as a full length album and never with all current members. It is mainly about having a set of songs that are staples of our live set, being able to give people something that more reflects the product they are seeing on stage night to night.


We have several small tours in the works, trying to make it out to cities all around US in next year or so, also some international plans people can follow our Facebook to find out about.

CV: Thank you again for spending some time talking and sharing with our readers. It was a pleasure. I wish you all the best and continued success.
REOG: Thank you; it was a pleasure as well.


Check out REOG at: www.linktr.ee/REOGmusic