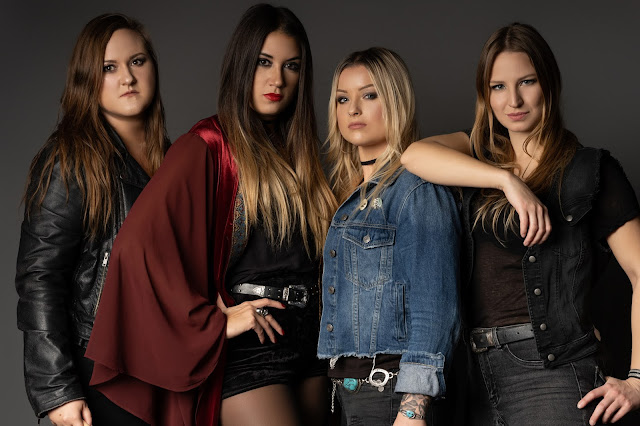 COSMICK VIEW: Hello, Emlee! Welcome to The Cosmick View. Thank you for taking some time out of your day to chat with me, it's greatly appreciated.

CV: Thundermother describes themselves as not just playing Rock n Roll but as “being Rock n Roll” itself. How would you define that? Is it a state of mind, an emotional response or is it an everyday attitude... something you wear like your favorite black leather jacket?
Emlee Johansson: Rock n’ Roll for us is not just about the music, it is not just about an image. It is a lifestyle, a lifestyle where you fight for what you believe in and don’t take shit from anyone. There is nothing fake about us, we are who we are and we are doing what we love to do. Rock n Roll is about self confidence and the enjoyment of life! We do also fight for the music genre Rock n Roll, we play it and live it to keep it alive, and our plan is to bring it back to the mainstream audience!
CV: The band has garnished the reputation as being "the hardest working band in the rock scene." Many bands feel as though they too provide the blood, sweat and tears needed for the long haul, however. But what do you think separates Thundermother from other bands? Is it a work ethic, a belief or something more than that in your opinion?
EJ: Of course we are not the only band struggling and fighting for our dreams and goals, it is a tough business and you need to put a lot of hard work into it to be successful. An example of how hard we work is that we managed to do three tours last year, in a pandemic. We took big risks going on these tours and we did not get any money for it, but we still did not hesitate a second to do it because we felt that we needed to play for ourselves and for the people. 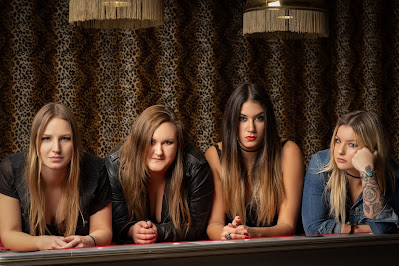 CV: Throughout 2020, most bands found it near impossible to perform live in any capacity.  However, Thundermother managed to uniquely tour despite restrictions.  Take us through the process of performing live during a world wide shut down. Was it easier said than done or was it looked at as "if there's a will, there's a way?”
EJ: I guess we were just crazy enough to do it, haha. I mean, we didn’t know there was gonna be a show until we actually played it, there were no guarantees at all. We just had to take one day at a time, and hope for the best. ”If there’s a will, there’s a way” definitely fits in here, but of course there was also a lot of hard work behind it, our managers did a great job and they were super creative! And we are super happy it went well, we only had to end the November tour earlier than expected, because of new restrictions. But we still feel very lucky and happy that for all the shows we could do!
The shows were special, we could not go out and meet the fans as we usually do, and the audience were sitting down far away from the stage, so it felt a little weird in the beginning but I must say the people who came had an amazing energy and it was just super fun and exciting to play again!
CV: The band's 2020 album, "Heat Wave," is getting a deluxe, 2 CD edition release in May.  The album will be available in various vinyl colors as well as including a second disc with never before released material. Why did the band feel the album required a new edition with only being released a year ago?
EJ: Since we released ”Heat Wave” in a pandemic, and could not tour as much as we had planned around the release, we felt that the album needed another boost. It was also perfect for us to enter the studio again and be creative with new stuff and do the bonus songs for the second disc. We had so much fun doing it and we are very proud of the outcome! Also, this new release has been giving us a fun thing to focus on while waiting for the world to open up again so we can tour again! 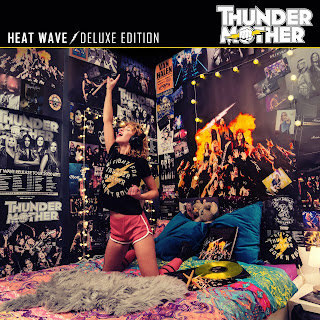 CV: Where do you see Thundermother sitting among the sea of modern Hard Rock acts with regards to pushing the envelope for both the genre and for the next generation of artists? Do you feel you are setting a standard for others to follow?
EJ: We definitely feel that we have something unique going on, we are four proud and strong women who are all great musicians and it is time to bring some gender equality into this industry. We want to inspire everyone to believe in themselves and in their dreams. And it’s time for a new fresh rock band to sellout the arenas, there hasn’t really been a new one since the 90’s? Thundermother is here to conquer the world!
CV: How would you define sustainability for a band, especially a young, up and coming act, in the current industry climate? Is there hope for a career contrary to what critics believe?
EJ: The most important thing is to never give up. If you have the talent and the patience and motivation to work hard I don’t see why it won’t happen. It is also very important to hold the team together and reach for the same goal. The industry has changed a bit, but there is definitely still hope for a great career out there!
CV: Given so much that's happened over the last 12 months, what do you feel has been your greatest lesson learned being an artist? 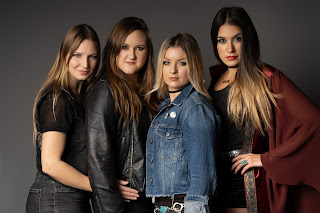 EJ: Well, I’ve realized how fragile the live industry is. And without live music the bands are dying, the people are dying! We need live music, and we could really feel that when we were on tour last year. People who came to our shows were so happy and thankful and so were we! Music is a powerful thing and the world needs it now more than ever. I just hope this pandemic makes people realize that music is not to be taken for granted.

There are many many people and lots of hard work behind every song you listen to, and they all need to pay their rent and get food on the table.
CV: In addition to the band's upcoming deluxe, 2 CD edition of "Heat Wave" and a new video for the single "You Can't Handle Me," what else can fans look forward to see coming from Thundermother in 2021?
EJ: Hopefully a lot of live shows after the summer! We still hope for the world to open up in a couple of months. We are eager to play for you! Also, we just started writing new songs for our next album. We do hav ebig plans for the future, unfortunately I can’t tell you more about it right now, but keep your eyes open.. ;)
CV: Thank you again Emlee for spending some time talking and sharing with our readers. It was a pleasure. I wish you all the best.
EJ: Thanks! Stay healthy and take care. I hope to see you soon on a show!
Check out Thundermother at:
Official: https://www.thundermother.com
Facebook: https://www.facebook.com/thundermother
Instagram: https://www.instagram.com/thundermother
Shop: https://www.thundermother.shop
Like The Cosmick View on Facebook at:
www.facebook.com/TheCosmickView