The Cosmick View: Hello, Samuel and welcome to The Cosmick View/MBM Ten Pounder! Thanks for taking some time to chat with us!
CV: Describe your definition of the band’s sound and style and how does that definition uniquely describe the music?
Samuel Konter: I usually say four words: Emotion Hits You Hard! As much as I know our music deeply now I would say it is that kind of music which hits you hard with its heaviness but at the same time could make you very emotional with its melodies. We are paying attention on making these two motives balanced in our music.
CV: Today, everyone talks about artist and audience connection. Is such a level of connection actually achievable for an artist and if so, how have you made the connection to your fans?
SK: I think it depends on which kind of artist you are and what is your band’s image, but there is a level of connection that is important with your fans, that they know that you love them and respect them even if you are not high fiving everyone during the show or after the show. For example, it is hard to imagine Rammstein doing interactions with the crowd during a show, or going out to take pictures with them and giving high fives, but it is undeniable that they love their fans! I hope that our fans, if they are out there, know that we love them.
CV: Is fan interaction an important part of the band’s inner culture?
SK: Our vision is to focus on the music and the live performance. Our concerts are like a play, it has a beginning and an end, between the two we are in another dimension, so we can’t interact with the audience, ‘cause the actor is not interacting with the audience during a play in a theater right? Would be strange…but in the mean time in our social medias we are trying to let our fans know that they are very important for us, and we love them!
CV: Can a band truly interact with its fans and still maintain a level of personal privacy without crossing the line and giving up their “personal space” in your opinion?
SK: I think there is a boundary which needs to be there cause if there is none, the magic between the artist and the fan is lost! But it doesn’t mean that you can’t be friendly with the fans!
CV: Is music, and its value, viewed differently around the world in your opinion? If so, what do you see as the biggest difference in such multiple views among various cultures?
SK: It is a good question. As much as I know these days all the music mostly can be found all around the world because of the technical revolution, but there are a lot of factors that can make a certain music style popular or unpopular in a region or music generally because of religious things, etc. I think these days music has lost its value generally because it is not exclusive anymore…but I hope in the next 10 years it will be different!
CV: Do you feel that a band that has an international appeal, will tend to connect more so to American audiences? Would they be more enticed or intrigued to see the band over indigenous acts because of the foreign flavor?
SK: As person from middle Europe I would say it is working, I think inversely. If you see it is from the USA, they say “ohh my God amazing,” but if it is from around Europe they say “ok let’s see.” But because of that, it could work like this in America as well…I hope it is working like this.
CV: Has modern-day digital technology made everyone an artist on some
level in your opinion? Have the actual lines of what really is an artist been
blurred?
SK: Totally, before the internet for example, if you were a successful musician you were a god in the eyes of the people, and mostly you only could be there if you were truly good…you almost had 0 chance to be famous if you were an average person, but this exclusivity and image that an artist is a supernatural creature that gives a bridge between a higher existence and our world was destroyed by the internet in my opinion…even if without the internet I couldn’t have those successes that I may have. People took advantage on the chance that they have been given an opportunity to be gods, and everyone’s paying the price of it. Imitators took the place of real magicians, and these days people don’t understand the difference, even real magicians as well.
CV: How would you describe the difference between an artist who follows
trends and one who sets them?
SK: Everything depends on honesty and if it’s coming from the heart. If you follow a trend because of your heart and that is what truly comes from you I’m ok with that…but I think those who follows trends lives their higher lives in a prison, and those who trying to set trends are free from all the worlds! 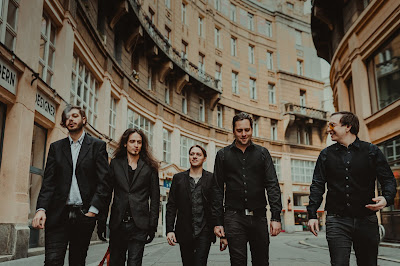 CV: Has music overall been splintered into too many sub-genres in an effort
to appease fan tastes in your opinion? And has such fan appeasements, in
actuality, weakened music’s impact as a whole by dividing audiences?
SK: I think the diversity of music is inevitable and because of the internet the process accelerated. I think there is no problem with the diversity, but yes, there is a problem with equality. The whole world is fighting for equality, why would the music industry be different, right?
It is a hard topic and we could speak hours about it. I think the unbalanced representations of genres are not happening because there are too many styles out there, it is there because those who are responsible for the representation don’t give a fuck about anything, and focusing on just the money. The music industry really became an “industry”…a money making factor that produces non-recyclable plastics and says “fuck you’ to the world when they see it’s dying, until they earn money with low-grade products that are cheap.
I think the most important thing that I would be glad is if I could see in the industry in the near future a balanced, equal representation of all genres…so the key to your success is not the type of music that you are playing and its “marketability”, but the quality of it. The musician’s only job would be to write honest, professional songs and if it’s truly good, it wouldn’t matter if it’s a pop, metal or a rap song, it will be on the radio represented to a huge amount of people.
CV: What can fans except to see coming next from you?
SK: Our second LP called “LIBRA” just came out on the 31th of January and we are really proud of this release…we worked so much on it and we gave our souls and hearts to make it as good as is possible from us. As far as we are able to look back over the past two years, we truly think that it has became a colorful, yet coherent album overall. It was a challenging task for us to create such an LP, while being honest and fulfilling our expectations to ourselves.
Libra is a concept album – divided into two parts with eight songs in total – about a fictional character and its inner journey from a murder driven by a long awaited revenge to the dissolving death of himself.


We hope that we will find new opportunities to show ourselves to the world, I really believe it will happen. Our plans are to play as many concerts, in as many places, to as many people as possible in the next few years, and we will continuously work on making our shows bigger, smellier, more colorful and more professional. We hope that the belief that we have in our music, and the attitude we are trying to follow will takes us to where we want to be.
CV: Thanks again for Samuel taking some time and talking. It is greatly appreciated.
SK: Thank you very much
Check out Heedless Elegance at:
Facebook: https://www.facebook.com/heedless.elegance
Instagram: https://www.instagram.com/heedlesselegance
Spotify: https://open.spotify.com/artist/7yNr78pUKCO7heCTAoSlF8?si=koEjmcmbT-6WCNmLhLqFIQ
Youtube: https://www.youtube.com/channel/UCJc7CBQEV75-AIWdQl4UuJw
Bandcamp: https://heedlesseleganceofficial.bandcamp.com/releases
Order merchandise/albums:
Webshop of metal.hu: https://metal.hu/zenekarok/heedless-elegance/
Like The Cosmick View on Facebook at:
www.facebook.com/TheCosmickView