Interview with Author and Ten Years After Drummer Ric Lee 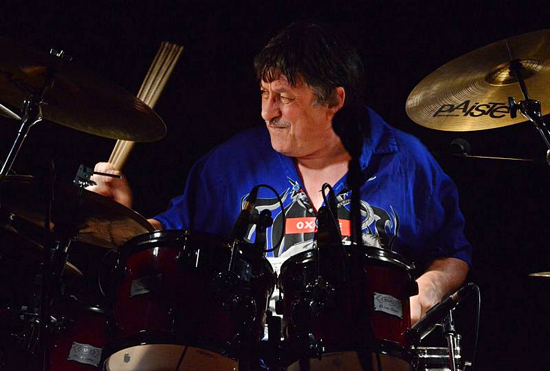 
COSMICK VIEW: Hello, Ric! Welcome to The Cosmick View. Thank you for taking some time out of your day to chat with me, it's greatly appreciated.
Ric Lee: Hi Mick! It’s my pleasure to take time out to talk with you. 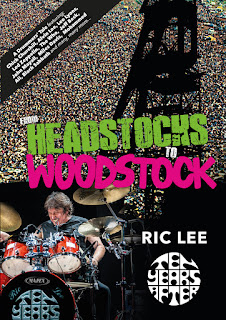 CV: Everyone has a story to tell. One man's journey could possibly serve to be a roadmap or even a source of inspiration for another. How do you see your personal story fulfilling such a role for those who read "From Headstocks to Woodstock?”
RL: Hopefully, my autobiography will inspire people, particularly young people, and not just musicians, in some way or another. The goal I had when writing was to give people “a good read” and also pass on some tips about dealing with life’s journey. As a musician, one of the most useful tips I’ve had when trying to master my instrument…which has still to happen completely, is the three Ps - Practice, Patience & Persistence.
CV: Is an undertaking, like writing about yourself, exposing your life for all to see and read a form of self analysis in your opinion? Looking back with some time and distance, did you feel there were things you needed to atone for that then you saw differently? Were there things that even surprised you or you had forgotten about?
RL: I have tried to be honest as far as my memory of events allows.
There were things that I’d forgotten that weren’t noted in my own diaries but I was incredibly lucky in that a very loyal fan from Boston, Massachusetts, Herb Staehr, had written a pictorial history called Alvin Lee and Ten Years After in pretty accurate, chronological order and this was the skeleton on which I was able to hang the flesh of my own stories and memories.
Looking back, one thing that did surprise me was how fit Miles Davis looked when I met him at the Newport Jazz Festival in 1969 and what a charming man he was on that occasion having heard of a nasty reputation he’d had in other circumstances.
CV: Can an autobiography be a way to reconcile the past, thus clearing the road for what lies ahead? What did you hope to gain by putting pen to paper and letting it all hang out?
RL: As I said before, my ultimate aim was just to create a good read. For example, if someone who knew me or the band had read my book and gave it to someone who didn’t know or know of us and passed on the book, they could get them to read it because “it’s a good read”.
CV: Why now, Ric? What was the driving factor that had you making the decision to write the book and tell your story?
RL: I’d wanted to write the book for many years. I’d written a few short stories; attempted a couple of film scripts and treatments. I went on a trip to Cornwall with an old friend about 24 years ago and decided to make a start on From Headstocks To Woodstock. The working title at that time was I’m Going Home. I then wrote for about 5 years with much stopping and starting when a chance conversation with a friend in Los Angeles persuaded me to finish the project and after about another 5 years, I completed the journey! 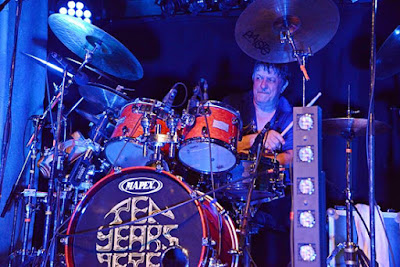 CV: When writing “From Headstocks to Woodstock,” which clocks in at a hearty 448 pages, were you confronted with events to include and ones to leave out? Were there parts of your tale that you believe remain better left unsaid or does the book leave no stone unturned?
RL: I’ve included all the relevant events I remember.
Such as:
In Appendix 1, what happened in England following the austerity of the Second World War in 1945…the year I was born.
My first meeting in a late night transport cafe with Alvin Lee & Leo Lyons before joining The Jaybirds with them. Later, along with Chick Churchill, how we became Ten Years After and our exciting journey which hit the world stage following the Woodstock movie release in 1970 and many other notable events along the way.
There are one or two stories that have come to mind since finishing my book but nothing that I would consider would have been better left out. It’s more or less “no stone unturned’
CV: What's the mindset when recounting the days of your life? Do you believe there needed to be a "moral to the story" for others to learn from?
RL: I suppose there is a “moral” which is laid out in the last few pages of the book reflecting: “Woodstock was about the counterculture, the minority, a half a million strong that proved to themselves and the world that society can coexist in peace and harmony under adverse conditions. Sadly history has proved it not to be the case. Years later we are still not ready for world peace or even any real ecological appreciation. Humanity is still struggling to reach that level of existence. The Woodstock generation had pointed the way but we got lost again. We need to get back to the spirit of giving to and sharing with one another. To live in harmony the way that half a million or more glimpsed it through being at Woodstock”.

CV: Ten Years After has a deluxe version release of "A Sting In The Tale" coming in March. The band is also planning to follow that release with a new album later this year. What can you tell us about the next record? What can fans expect? Will there be any surprises?
RL: The studio album A Sting In The Tale was recorded in the UK in 2017 and was a totally collaborative affair. A joy to create and we’re all very happy with the result. The Deko Entertainment release is called the Deluxe Edition as there are 4 bonus ’live’ tracks including our 1970s hit song in the USA, I’d Love To Change The World. Plans for the future, when COVID-19 allows, include writing and recording a new studio album based on the bluesy feel of our first two albums Ten Years After and Undead. We’re all looking forward to touring as soon as possible to connect again with our very loyal fanbase and I’d like to take this opportunity to thank everyone for their loyalty and continued support through this dreadful pandemic.

CV: How do you see the music industry as a whole changing to accommodate what many feel will be a never ending cycle of restrictions and alterations of an artist’s ability to tour and perform live? Is there a possible silver lining that can get things back up and running from your point of view?
RL: RL: It’s already happening with live streaming concerts. We contributed to a virtual concert in November 2020 to support the Let Me Help You Foundation set up by Soho Johnny in Manhattan to raise funds, on that occasion, for COVID sufferers and their families and Prostate Cancer sufferers too. Deko have plans for similar events for us in future. The UK music industry is actively lobbying our government to implement rules which should have been contained in the Brexit deal when we left the EU but which both parties neglected to consider. I think, if many promoters are still in business after lockdown, then things will get back up and running fairly quickly. The question is whether the artists and promoters will be able to make any profits if social distancing is in force. We’re an optimistic business and I think we’ll bounce back once we’ve figured out how to live with COVID-19 as we do with Flu. 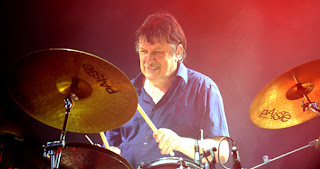 CV: Ric, if you had to describe your career using only three words, what would those words be?
RL: Blessed and Lucky
CV: In addition to the autobiography and the upcoming Ten Years After albums, what else can fans expect to see coming from you in 2021?
RL: Around June or July Chrysalis Records is planning the release of the Ten Years After Woodstock album which features all 7 songs…including two false starts to Good Morning Little Schoolgirl due to the damp atmosphere after the storm which kept putting the guitars out of tune, that we played at the festival in August 1969. The album sounds great and we’re really looking forward to the release. As far as I’m aware, it’s the first time these tracks have been released. October 2021 is the fiftieth anniversary of our A Space In Time album and for that I believe Chrysalis are planning something special. Keep an eye on our website & Facebook pages for further details.
CV: Thank you again Ric for spending some time talking and sharing with our readers. It was such a pleasure. I wish you all the best.
Check out Ric at:
Official: www.Ricleetya.com
to get a signed copy of the book with a special dedication if requested