Interview with the German Epic Metal Band On Atlas' Shoulders 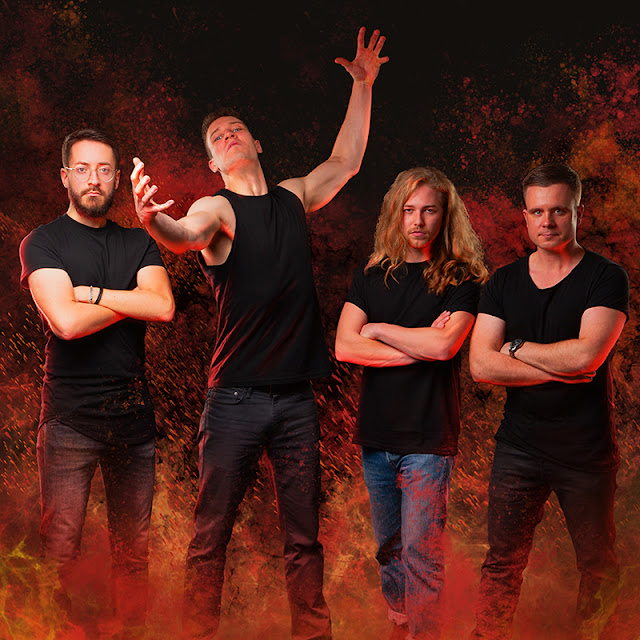 COSMICK VIEW: Hello! Welcome to The Cosmick View. Thank you for taking some time out of your day to chat with me, it's greatly appreciated.
CV: Do you feel Heavy Metal music in general is viewed differently by fans in Europe compared to fans elsewhere, especially in America, and if so why?
On Atlas’ Shoulders: Musically, heavy metal definitely has very distinct regional styles…Brazilian thrash, German teutonic metal, to name but a few). All these differences are awesome in our view, as they are what make this genre we all love so interesting and diverse.
And similarly, fans around the world also have different views on metal. In some regions, metal is extremely underground and barely visible in the mainstream. In other regions, metal bands have massive followings. In Germany, which is where On Atlas’ Shoulders is located, there is a strong heritage in many subgenres such as German heavy metal (e.g. Accept), thrash (e.g. Kreator), and prog (e.g. Unprocessed). While metal is definitely not mainstream here, there are flourishing local scenes in many major cities.
CV: What do you feel makes Heavy Metal music so alluring to the fans? What is it about the music that personally resonates so strongly with you?
OAS: For us, it is the powerful, almost tribal rhythms that can be extremely motivating and uplifting…the musical excellence, the diversity of styles. What other genre of music has such depth to it? From Priest to Dream Theater to Sepultura to Obscura to Bell Witch and so many in between…whatever you like, you can find a new rabbit hole to crawl into!
CV: Has Metal splintered into too many sub-genres in your opinion, thus, making it harder for newer bands to actually classify themselves as one style over another?  Is it confusing for fans as well?
OAS: There is absolutely an over-abundance of sub-genre-classifications nowadays, and as a band, it is difficult to classify oneself. Many sub-genres are heavily overlapping. Are we simply heavy metal, traditional metal, power metal, epic heavy metal, or something else?
That being said, we believe it is also a testament to how diverse the musical landscape in metal has become, which is awesome. If you have a specific taste in metal and know your sub-genres, you can easily find bands that fit into that category. So as massive metal fans ourselves, that aspect is great.
CV: How would you describe the current state of the music business considering we are now living in a COVID aware, and maybe even feared world? Have things drastically changed long-term for artists and bands given the recent pandemic? What are your thoughts?
OAS: For live bands such as On Atlas’ Shoulders, it has impacted every aspect of band life: rehearsing has been impossible during lockdowns, gigs have all been cancelled or postponed. This has led many bands to search for alternative forms of staying active, e.g. through focusing on songwriting, increased social media presence or livestreams. And we believe that it will have a lasting effect on the music business, as this “digital” work will continue to be very important.
At the same time, we are also convinced that audiences and bands will appreciate live shows so much more now that we all know what it is like without them. For us as a band, but also as huge metal fans ourselves, we can’t wait to play and visit live shows again!

CV: What do you feel makes your band and its particular approach to songwriting work? What keeps the band together and making music?
OAS: We all have slightly different tastes in metal sub-genres, but for us that is positive. Influences of all the band members are included in our songs and make them unique. This is not a one-man-show. Also, we have a very democratic process when making any important choices, from song parts to business decisions: Every member can vote…the majority decision is then carried out. And if someone has a huge problem with a decision, he can veto it. This might sound very bureaucratic, but it is extremely valuable and keeps us united. 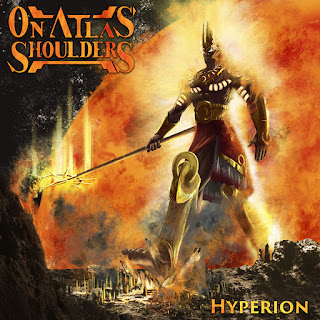 Additionally, we all share a very high work ethic and an efficient and independent workflow. This has enabled us to write, record and release our debut record “Invictus” in about one year. After the pandemic hit, we decided to release it despite not being able to tour, and made the conscious decision to put all the energy we had built up for the live shows into songwriting once again. We are proud to be able to release our second full-length “Hyperion” in the coming months, starting with a first single very soon.

CV: On a more global view, how do you see your band’s music and songwriting separating itself from just being another Heavy Metal act?
OAS: As mentioned, we all have our own different tastes and preferences in metal, and the blend is what makes our own music unique. For example, some favorite bands include Judas Priest and Accept for Björn, Breaking Benjamin and Dream Theater for Marius, Enforcer and Unleash the Archers for Ben and Obscura and Lamb of God for Leo. While our combined sound can be categorized as Epic Heavy Metal, you will find elements of all our influences in the individual songs, in our opinion making them very unique.
Another often overlooked but very important element for us are the lyrics. The overarching goal is to convey courage and a fighting spirit. The themes reach from epic tales that take the listener to foreign worlds, to difficult emotions and internal conflicts that are described visually; to motivating lyrics aimed at evoking feelings of strength. For us it is essential that our songs have a deeper meaning.
CV: Can an artist truly be unique? Some would argue there is no such thing as being unique; that it’s nothing more than a compounding of influences making an artist who or what they are. Would this then say that artists today are destined to be just copies of those who have already come to pass?
OAS: We absolutely believe artists can be unique. Everyone has influences that are absolutely vital for their own sound, but the question is what do you do with those influences? And while many will simply copy and paste riffs and not progress musically, others will take what their predecessors have created and build upon it.
That actually goes hand in hand with our band name: On Atlas’ Shoulders originates from the saying “standing on the shoulders of giants”. In science and philosophy, this theme implies that all progress is made by building upon previous discoveries. Individuals such as Albert Einstein or Sir Isaac Newton resemble the so-called “giants” who made essential breakthroughs and enabled further research and progression. Instead of remaining in their shadows, progress is made by standing on their shoulders and using their knowledge as a catalyst for future discoveries. The name On Atlas’ Shoulders transfers this concept into the musical realm. Musicians and bands are influenced by the preceding musical giants, building upon their work and transforming the music into something new.
CV: Are there life lessons to learn being in a Heavy Metal band that you feel cannot be taught elsewhere? If so, what are they?
OAS: This is something that could surely also be taught elsewhere, but comes to mind instantly: Stay true to yourself and your interests, whatever they may be. Heavy metal is not a mainstream genre, at least not in Germany, and we could potentially have much more monetary success playing “Schlager” music (German folk music) at weddings haha…but that would not make us happy. Do what you love with passion and simply have a good time while you are on this planet. 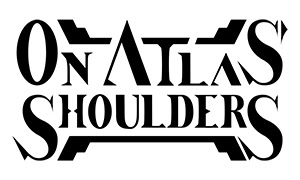 CV: What do you feel makes someone a “rock star”? Does being a rock star automatically make one iconic or are the two completely different in your opinion?
OAS: It depends on how you define a rock star. But in our view, rock stars are previous generations’ pioneers in rock and metal who elevated the music to what it is today. Ozzy, Halford, Slash, Eddie Van Halen…those kinds of guys…icons if you will. Of course many, but not all, of them also indulged in what would be considered the rock star lifestyle, but that is more of a by-product of their massive success, which they typically reached by being pioneers in their field.
You could also define the term as any rock/metal musician who has a big following (hence being a “star”), which would nowadays also apply to many internet/Instagram musicians who never play live and some of whom even fake their playing, but that would not be what we consider a rock star in the original sense of the word.

CV: What's next for you? What can fans expect to see coming as the world looks to surmount a new normal laced with a load of restrictions?
OAS: We have used the pandemic lockdown in Germany to focus all our energy on writing our second full-length album “Hyperion,” which has been announced for late spring 2021. We can hardly wait to show you what we have been working on…in our opinion it takes everything that made our debut record unique and pushes it to a whole other level…both in terms of songwriting and production! We will be announcing single releases in the coming weeks, so keep an eye on our social media channels.
CV: Thank you again for spending some time talking and sharing with our readers. It was a pleasure. I wish you all the best and continued success.
OAS: Thank you so much for your interest - greetings from Germany, stay strong and rock on!
Check out On Atlas’ Shoulders at:
Official: https://www.onatlasshoulders.com/
Facebook: https://www.facebook.com/onatlasshoulders
Instagram: https://www.instagram.com/onatlasshoulders/
Twitter: https://twitter.com/oas_heavymetal