COSMICK VIEW: Hello! Welcome to The Cosmick View. Thank you for taking some time out of your day to chat with me, it's greatly appreciated.
Christian: Hey Cosmick View! My honor! I greatly appreciate your interest.
CV: Do you feel Heavy Metal music in general is viewed differently by fans in Europe compared to fans elsewhere, especially in America, and if so why?
Christian: I for myself haven’t left Europe to experience the metal feeling so this one’s hard to answer. But according to the reports in magazines the Europeans seem to be way more emotional than the American people – if you exclude Southern America. I don’t know why it’s that way. Talking about central Europe like Austria and Germany the audience is very often quite reserved and sometimes they the guys even wait and drink in front of the venue as long as the less known bands are playing. That’s a pity, I cannot understand this behavior.
CV: What do you feel makes Heavy Metal music so alluring to the fans? What is it about the music that personally resonates so strongly with you?
Christian: I like the energy and that there are practically no limits concerning the sound. It gives me a feeling of strength and relief. Got a bad day? Turn metal on and just leave your worries behind. As an extreme metal artist I also dig this sinister atmosphere and issues in the lyrics.

CV: Has Metal splintered into too many sub-genres in your opinion, thus, making it harder for newer bands to actually classify themselves as one style over another?  Is it confusing for fans as well?
Christian: I think the sub-genres are mainly created by the media and the business to categorize their bands. I would never call ourselves a melodic blackened death-thrash whatsoever band. We’re just metal. Maybe extreme metal but that’s it. Some labels like black metal, thrash metal, power metal and so on are ok so that you know where this journey leads but adding an extra term for every ounce of influence is just way too much.
CV: How would you describe the current state of the music business considering we are now living in a COVID aware, and maybe even feared world? Have things drastically changed long-term for artists and bands given the recent pandemic? What are your thoughts?
Christian: COVID hit our band very hard as we’re part Austrian and part German. The borders were closed over here and thus we could not rehearse or even meet for a long time which also delayed songwriting for Dead Aesthetics. 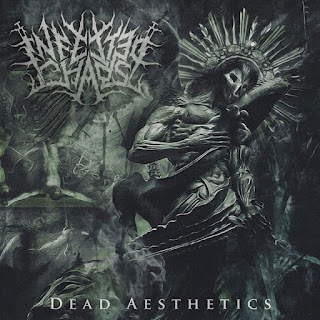 It’s also unclear what the future will look like. I doubt that it will ever be again like we were used to. It’s hard to plan some gigs as you don’t know what will be tomorrow. Also the clubs struggle. It gets tougher and tougher to find a location that’s booking small bands like us.

CV: What do you feel makes your band and its particular approach to songwriting work? What keeps the band together and making music?
Christian: It’s the fact that we’re just having a fantastic time every time we get together. The rest of the world becomes accessory and we sink into our own cosmos. We’re from the same region, got together by chance and finally became close friends.
CV: On a more global view, how do you see your band’s music and songwriting separating itself from just being another Heavy Metal act?
Christian: Each member’s personal musical taste flows into our sound. That’s all I guess. We got these modern influences for examples that are definitely not by me. I’m one of the old-school guys but if it fits we’ll use it. It’s the song that matters.
Everyone’s bringing his own qualities and the result is INFECTED CHAOS.
CV: Can an artist truly be unique? Some would argue there is no such thing as being unique; that it’s nothing more than a compounding of influences making an artist who or what they are. Would this then say that artists today are destined to be just copies of those who have already come to pass?
Christian: It’s more about being yourself in what you do. Then you’re unique. I believe that nowhere on this planet is the exact copy of you or me. Be it as human or artist. OF course there is too much music released nowadays and a lot of this stuff may sound similar but in the end, it’s integrity and dedication that counts. Music – and especially metal – is not putting note after note. It’s about living what you´re composing.

CV: Are there life lessons to learn being in a Heavy Metal band that you feel cannot be taught elsewhere? If so, what are they?
Christian: All the lessons you need to learn for living can be taught elsewhere but it’s more fun when you’re educated by metal. The distinctive concentration and work in the band for example. The falling and getting back on your feet is also way easier.

CV: What do you feel makes someone a “rock star”? Does being a rock star automatically make one iconic or are the two completely different in your opinion?
Christian: A “rock star” has to be someone who influences a certain scene, in my humble opinion. I mean they call Justin Bieber a rock star.... What the hell does this kid have to do with rock? There definitely were rock stars in the metal scene who were and still are iconic. Just think about Lemmy…the look, the lifestyle, the integrity. These are all small details that make an icon.
CV: What's next for you? What can fans expect to see coming as the world looks to surmount a new normal laced with a load of restrictions?
Christian: We’ll release our third full-length album DEAD AESTHETICS on September 11th and then gonna play as many gigs as we can. At least two more video clips are planned for promotion…and we’re already collecting ideas for the fourth album. So stay tuned.
CV: Thank you again for spending some time talking and sharing with our readers. It was a pleasure. I wish you all the best and continued success.
Christian: It was my pleasure! Stay metal!