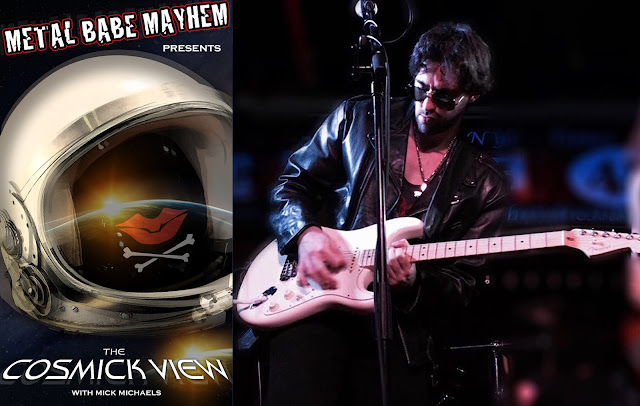 COSMICK VIEW: Hello, Alan! Welcome to The Cosmick View. Thank you for taking some time out of your day to chat with me, it is greatly appreciated.

CV: What do you feel sets your music apart from other artists, especially those who are similar in styles? What's the specific dynamic and allure to your signature sound and style that has people taking notice?
Alan Christopher: I think it’s the fact that I'm vnot trying to reinvent that wheel. I'm taking the foundation of our idols and giving it sort of an updated twist. As previously mentioned, the blending of styles helps out a lot. That's the way I approach my guitar playing. Doing all kinds of crazy tricks and playing lighting fast seems to be very popular today, but to me, it’s so overdone and played out. The tapping, dive bombs, sweep picking and relentless shredding... Do I love it? Of course I do. Eddie Van Halen, Vai, Malmsteen, Satriani, Michael Angelo Batio have mastered that stuff and its great, but leave it to them. If you try and mimic them, you sound like a clone that's not as good. I do incorporate some of those techniques in my playing, but just a bit to give it some flavor. I prefer to focus around the techniques of the blues greats to add that bit of soul and emotion, so that when I pop in a real rock or metal technique, it stands out and it’s not bunched in with the same thousand other notes played by a thousand other guitarists. Less is more.

CV: You have made note about striving to give fans an ultimate musical experience. How do you go about creating that musical vision, as well as generating the impact you want to have on the audience?
AC: Right now it’s about getting in front of as many different audiences as we can. The "ultimate musical experience" is the end goal in all of this. I'm getting up there, giving it our all, giving the audience a taste of all different genres and trying to maintain a common core sound if that makes sense. Once I start getting more fans and playing longer sets imI can really expand upon the visual aspect and immersing you in an all out rock n roll euphoria.

CV: What was it like working with Sweet Sienna and having a female vocalist atthe heml? Did it bring something more to the music?
AC: It was just awesome. Katrien Van Riel is a powerhouse musician and a great performer. Not only does she sing, but she’s the bass player. She studies musical theater, theory and she can sight read. She really is the full package. Having a strong, young female leading a rock band is what the music industry needs more of. We need another Joan Jett, another Lita Ford, someone for teenage girls to look up to and say “I want to put Snapchat away, pick up a guitar and be like her!” Katrien delivers a raw rock and roll performance like no other.

CV: You hail from New York City. NYC is one of those cities where regardless of who you are, you either sink or swim.  Does this type of realism have any effect on your drive to succeed?
AC: Absolutely; there’s a lot of competition out there and a lot of great up and comings acts, especially in NYC. We also live in a time where people can literally create music with a computer, record in home studios and advertise the music themselves, so the industry really is saturated. Marketing is key and proper marketing is expensive. In that sink or swim environment you’re referring to, it’s essential to do that little extra that other bands may not be doing to make sure your product is being blasted literally all over the world.

CV: In your opinion, is there a middle ground where a band can survive and still thrive or is it a do or die climate in today's industry?
AC: I think there is some sort of middle ground. Unless your band does something viral on the internet or gets lucky and has the right person hear them and take them on, it’s very difficult to become a mega star. Bands can still make a great living doing small tours, co-headlining shows and the individual members can do session work in the meantime. You don’t need to be the next Rolling Stones to be a success in music. The key is not taking your foot off the gas though. Once you slow down or get sloppy, then you might as well hang it up.

CV:You have performed with many notable artists: Warrant, Mike Tramp, LA Guns and Skid Row just to name a few.  What's it like to have such a high profile list of shows runder your belt?
AC: It’s absolutely amazing! I'm young, so being out there with such seasoned and talented artists is an honor and a pleasure. These guys have seen, done and played it all. What’s even better is I got to play with some of the guys I grew up idolizing. You can’t ask for more than that.

CV: The Blues are most definitely at the core of your songwriting approach. What other elements are considered when a song begins to evolve?
AC: I come from different musical backgrounds, which in my opinion is great. When everyone likes the same thing, the music becomes repetitive and boring. I lovr classic rock, metal, glam rock, grunge etc. I even love jazz, but to me, nothing beats the blues. The structure, the foundation, the sense of raw soul and feeling is essential to capturing our sound. Now mix in the other styles; with a rock and blues background, it gives the music a great live presence. Eventually I really want to expand on the musical theater bit and give the audience an amazing stage show to go along with the set list. When you see Kiss, Alice Cooper or Iron Maiden live, you’re not only hearing rock and roll, for those two hours you’re seeing it, you’re living it.

CV: Do you allow things to just happen, seeing where a song goes, or is there a certain course structure you keep a song on, essentially making it destined to achieve its overall potential?
AC: Usually I will have a riff in mind and take that and just expand on it. My songs literally grow until the second they are finished being recorded. I drive the producer crazy with last minute changes in the studio and improv, but that’s what makes it fun! When it comes to lyrics, usually, I will have them completely done and then do a bit of editing.

CV: Fans have described your music as warm, inviting and uplifting.  Does that accurately reflect how you would describe you as an artist?
AC: In regards to certain songs, yes. I try and tap into everyday life, give the audience something to relate to. Bob Dylan, Billy Joel or Bruce Springsteen; they didn’t just write songs, they told stories, and that’s what we’re trying to capture. Then of course, I also have the straight up rock tunes that are there for nothing else other than for you to get in your car, roll down the windows and drive like hell.  I love vocal harmonies and giving the keys just as much presence as the guitar. Those rock tracks range from gritty and raw to sing along Arena Rock anthems. Think of a Lynyrd Skynyrd, AC/DC, Def Leppard, Deep Purple, Guns N Roses kind of mash up, but with those bluesy guitar riffs.

CV: Walk us through a show...what can fans who haven’t yet seen you perform expect?
AC: It really depends on the time slot. If it’s a short set, I get the ball rolling and hit you hard with original tracks. If  there's more time, I’ll do some instrumental bits and have fun with a few covers. 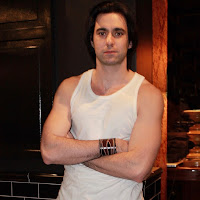 CV: What's next for you?
AC: It’s going to be a lot of recording and a lot of promo.
CV: Thank you again Alan for spending some time talking and sharing with our readers. I wish you all the best and continued success.

Read more at www.thecosmickview.com
Fan The Cosmick View on Facebook at: www.facebook.com/TheCosmickView

What to see your logo here? Contact The Cosmick View for advertising rates.