Interview with Andy Shernoff of Punk Rock Trailblazers The Dictators 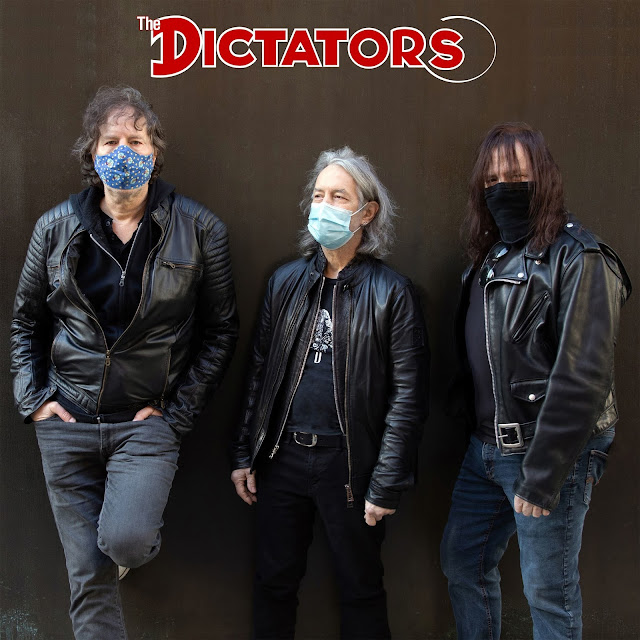 COSMICK VIEW: Hello, Andy! Welcome to The Cosmick View. Thank you for taking some time out of your day to chat with me, it's greatly appreciated.
CV: Do you find that with the Dictators having a 45 plus year legacy attached to its name creates a certain amount of expectation on writing new material for a modern listening audience...either for the band themselves or even the fans? Is that sort of thing even a consideration on your part?
Andy Shernoff: We gave no thought to the expectations of a modern audience or anybody. We’re not chasing hits and we’re not trying to change the world. We’re just a bunch of guys who like to make music…because every day you make music is a good day.
The only consideration was a stylistic one, to release songs that fell into the classic Dictators sound of an aggressive two guitar attack with sarcastic, tongue in cheek lyrics. In other words, to continue making music that is totally out of step with the times
CV: How do you see this reunion differently than previous outings with the band? Has time away and some level of nostalgia fueled the recent regrouping? Has anything changed for you?
AS: The circumstances for every reunion have been different. This time, Scott and I were brought together with Ross by some Dictators business. Once that was finalized, Ross suggested reforming the original band. It was literally the last thing on my mind but Scott’s enthusiasm won me over. Adding Albert Bouchard on drums was a no brainer. We have all worked with Albert in the past and knew how much he could contribute. He’s a writer, singer, arranger, and he helped out so much on the production end...plus he’s the world’s greatest cowbell player.
CV: Do you find this reassembling sort of just "picking up where things left off" with the band, like old hat, or has the dynamic changed in such a way where as it's like a new band entirely?
AS: Earlier this year, Scott Kempner had to leave due to health issues so we had to replace him. With Albert on drums and a new guitar player it is basically a brand new band.

Ross, Albert and I have worked together on many projects over the years, so the process has been smooth. We tracked 4 songs live in the studio in a few hours after just two living room rehearsals. The dynamics have definitely changed in that Manitoba didn’t join us and Scott had to leave but we are excited to see where this band will go.
CV: With no new music from the Dictators for nearly 20 years, has not working together for that long as a band given you a new perspective or even some insight on the whole process of writing and releasing music in today’s market?
AS: We have all been releasing music on our own over the years, so we have continued to grow as musicians. Between us, we literally have hundreds of album credits. That experience keeps things running efficiently. Working out songs and recording has been a breeze.

Of course we are very aware that the market has changed. We can now make music in our homes and distribute it without a record company. Trading files over the internet takes longer but it is liberating to be free of any record company interference and just follow our muse.
CV: Tell us about the band's new singles, "Let's Get the Band Back Together" and "God Damn New York." Both tracks include writers from outside the band. Does having external contributors alter the overall energy of the group's original sound or even the vision?
AS: These are songs I had laying around that excited the other guys in the band. I’ll grab a good idea wherever I find it. Sometimes I need a kick to find the inspirational spark but when I hear something that perks my ear I’ll use it no matter where it comes from. The songs we are working on now have all been developed internally.
CV: Is a full album for the Dictators currently in the works?
AS: If we had a full album now, I don’t even know where we could sell it. There are not that many record stores around that focus on selling new music and internet sales for physical products are meager. In my view, it’s a singles world; it’s about the individual song rather than the album

Music also plays a different role in people’s lives today. When I was a kid I gave a record my full attention. I would sit down and listen to the record while I read the album credits. Today music is something that is played in the background while you clean the house, exercise or make dinner. You put on a playlist and when you get bored with a song you just click over to the next one.
When we start doing shows we will probably compile our recordings. onto a CD or vinyl. It makes more sense to sell physical product as a souvenir of a live show 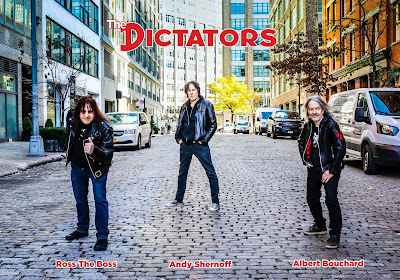 CV: How would you define "classic" as it pertains to music and do you consider the Dictators' music to be classic...or is it still evolving, especially in light of the recent reformation? Is classic more than just a number in your opinion?
AS: I think I write songs in a classic rock style; a cool guitar riff, a 4/4 drum beat, a catchy chorus and a ripping guitar solo. I suspect we will continue working within those limitations. I don’t feel the need to be innovative or break new ground and we’ll probably stay within those parameters as we record more music and start to play shows.
CV: The COVID pandemic changed how many people viewed the world around them. For some, it was a wake up call to start living and for others, it seemed to be a shut down, an abrupt end to all that they had come to know. How did you view what has taken place over the last 12 months? Did you find some sort of silver lining to embrace?
AS: I feel very lucky…I moved out of New York City to a rural part of the Hudson Valley a few years ago. We also started work on the reunited Dictators in January 2020 just as the shutdown started so we all had work to keep us busy and sane.

I know people who died and others who were sick from COVID, many got very sick. Then there were the people who lost work and suffered mentally from the isolation...I see no silver lining.
CV: As an artist, has there been some invaluable lesson learned for you throughout this entire pandemic? Any revelations?
AS: Not really, I’m just glad I got through it and had Dictators’ recording work to keep me occupied during the craziness
CV: In addition to the band’s reforming and new singles, what else can fans look forward to see coming from The Dictators in 2021?
AS: We will be announcing a new band member soon along with a new song and video in August…another song and video in November and shows in 2022
CV: Thank you again Andy for spending some time talking and sharing with our readers. It was a pleasure. I wish you all the best.
Check out The Dictators at:
Facebook: https://www.facebook.com/thedictators/
Youtube: https://www.youtube.com/channel/UCDwZXroxxGmagAW2v9BxqPQ
Official: www.TheDictators.com
Andy Shernoff: www.AndyShernoff.com
Like The Cosmick View on Facebook at:
www.facebook.com/TheCosmickView