Interview with Zosia of Reign of Z 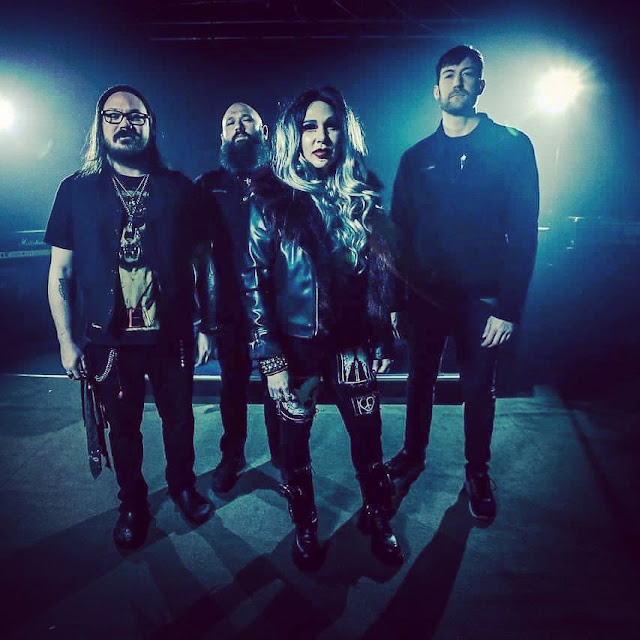 By Mick Michaels
COSMICK VIEW: Hello, Zosia! Welcome to The Cosmick View. Thank you for taking some time out of your day to chat with me, it is greatly appreciated.
CV: What do you feel sets the band apart from other bands, especially those of similar sound and style? What specific allure does your sound and style have that has people taking notice?
Zosia: I feel what sets Reign of Z apart from other bands is honestly our content of songs. Everything I write is autobiographical. It’s real, raw and unapologetic. I think also from other female bands I’ve heard, my voice is unique…I do get comparisons. When people hear it they know that’s me which I think is pretty cool. People also take notice of our stage aesthetics…I’m very theatrical but really I’m just reliving everything I write…we’re a live band no doubt.
CV: For any band, dynamics is key to grabbing an audience's attention. What do you feel is the main ingredient to having such a captivating dynamic and being able to bring something more to the music?
Zosia: Well for myself I’m not afraid to use the WHOLE venue…my band mates sometimes don’t even know where I’m going to be when the show starts. Which sometimes doesn’t go over well…but I like to play with the whole room instead of one place. I think that’s what pulls people in. Plus my band mates have been together 20 years so they have a lot of energy and chemistry.
CV: How would you describe the ultimate musical experience for your fans?
Zosia: I would hope when they leave they feel their hard earned money gave them a SHOW in all aspects.

CV: How does the band go about creating that musical vision, while generating the impact the band wants to have on its audience?
Zosia: The vision comes down to the budget…we’re a working class band…we don’t have big pockets. I emphasize this heavily because every prop or costumes or gear or lights (we have), we’ve saved up or bought. We hope people feel they can interact and have a positive experience.
CV: The music business has always been one that regardless of who you are, where you came from or where you've been, you can either sink or swim.  Does this type of realism have any effect on how the band drives itself to succeed?
Zosia: 1,000 percent!!!! I feel the industry now has become “he with the most money wins.” That’s why so many bands don’t survive. They hemorrhage money and expect to do so repeatedly…and if you don’t have a trust fund, an investor, or a band mate that has a lot of capital, or a label to put money behind you, a lot of times bands will do this professionally and belly up due to not having the financial means.
CV: In your opinion, is there any middle ground for a band or is it a do or die climate in today's music industry?
Zosia: It’s DO or DIE…I tell people over and over if you want stability, a family, a 9-5 or something concrete…this isn’t the career for you…you sacrifice so much for a chance.
CV: How would you describe the band's internal energy?
Zosia: Our energy I feel is insane…we’re exhausted and sweating after a set…I always feel bad hugging people because I’m always so sweaty.

CV: Does the band’s outward appearance align with its true inward nature from your perspective?
Zosia: I would say so…I don’t like to speak for my guys…but me, my character is an entity I aspire to be…she’s a force to be reckoned with. I created her so I can look up to her in my daily life…onstage she’s like an anti-hero I would want to be.
CV: What's at the core of the band's songwriting approach?
Zosia: Usually Blink will work with a producer and then create a rough draft and I’ll come up with scratch vocals, bounce them to our producer, have a back and forth until we’re set that the lyrics are perfect then record.

CV: Are there certain elements that are considered when a song begins to take form and evolves?
Zosia: For me I have endless amounts of songs but I have to sit with it for a couple days or even weeks to decide what it’s going to be about…it has to make sense to me otherwise I can’t perform it.
CV: Do you allow things to just happen when writing; seeing where a song goes, or is there a certain course of action and structure you keep a song on, thus, essentially making it destined to achieve its overall potential?
Zosia: I play things on repeat probably to the point it’s nauseating. I do this as well with songs I like from other artists. I have to dive into the world and rip it apart so I can create one, that when people close their eyes, they can see.
CV: Do you feel how the fans and critics describe the band’s music accurately reflects how you would describe the band’s music?
Zosia: We always get compared to Evanescence or In This Moment, even Marilyn Manson in his earlier years, sometimes Halestorm…. Anytime someone compares us…I take it as a compliment because who wouldn’t want to be compared to someone who’s successful?
CV: Walk us through a typical show for the band...what can fans who have never seen you perform expect?
Zosia: First where I’ll come in from and secondly probably the intensity and passion…I always say we’re not an internet band…we’re a live band you just have to experience us.
CV: What more can fans look forward to seeing coming from the band?
Zosia: TOURING!!! We’re getting into places we haven’t been able to since we signed with Godsize records…and we’ve had so many requests for different markets. Now we have a label, manager and booking agent…makes life a lot easier.
CV: Thank you again Zosia for spending some time talking and sharing with our readers. I wish you all the best and continued success.
Check out Reign of Z at:
Official: www.reignofz.com
Facebook: www.facebook.com/reignofz
IG: reignofzofficial
Like The Cosmick View on Facebook at:
www.facebook.com/TheCosmickView