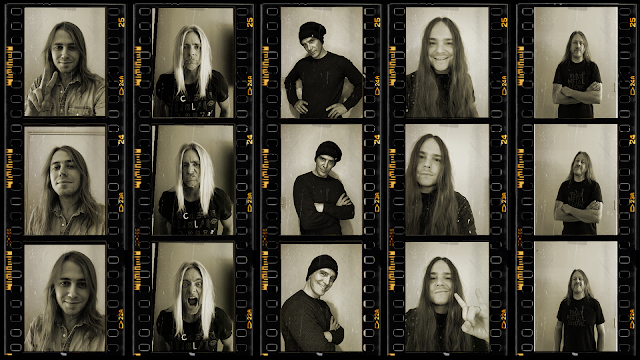 COSMICK VIEW: Hello, Terry! Welcome to The Cosmick View. Thank you for taking some time out of your day to chat with me, it's greatly appreciated.
Terry LeRoi: Thank you Mick for taking the time as well… I’m happy to be here!

CV: Ronnie James Dio was the musician's musician. He was not only immensely talented, he was iconic. From Elf to Rainbow, from Black Sabbath to his own band Dio to Heaven and Hell. His contribution to Heavy Metal music goes beyond invaluable and his voice is timeless, becoming the standard for the genre. How did Ronnie inspire you and your desire to be an artist?
TLR: My inspiration of Ronnie James Dio goes all the way back to hearing Rainbow on the radio with their hit “Man on the Silver Mountain” and then shortly after when he joined Sabbath hearing “Neon Knights” & “Heaven and Hell.” Once I was hooked then I delved into Elf and started to go back into his previous catalogue.

I’ve always loved his persona. It’s as if he was from another ancient time long ago...from King Arthur’s Court/Knights of the Round Table. His voice was powerful and other worldly...he could sound like an angel and then roar like a lion or the devil…certainly one of the greatest voices in heavy-metal. He was classy and regal. He was never in the news for some ridiculous controversy or legal nonsense that a lot of bands find themselves in. A true gentleman and dynamic entertainer!

CV: A new cover of Dio's 1983 "Holy Diver" classic, "Stand Up and Shout," is now available from the recently formed LeRoi XIII. Were other Dio tracks being considered before deciding upon "Stand Up and Shout" or was that song always the first and only choice to cover?
TLR: “Stand Up and Shout” really was the only choice. It’s always been one of my favorite tracks to sing and since it is the namesake of the cancer foundation it just seemed fitting. Thematically the songs’ self empowerment message about speaking your inner truth and taking charge of your destiny is as relevant today as it has ever been.

CV: How did you approach putting your own personal stamp on such an iconic song that is so recognizable and loved by fans?
TLR: We wanted to stay true to the basic structure of the song and not deviate too much from that. But there were a few opportunities for us to take liberties which we felt like added our own stamp of originality to the track.

For example we had Sammy Boller play this amazing shred intro. Then also in a very “Gypsy” like vocal addition, I screamed the title of the song… after the lead section Will Hunt experimented with playing through that portion in half time. So all in all we had some fun adding some cool nuances to the track but still keeping as close to the original as possible.

CV: What are you hoping fans come away with after hearing your version of "Stand Up and Shout?"
TLR: First and foremost we are hoping that old fans as well as new feel some of the same excitement and power from this track that was felt from the original when it first hit the airwaves 37 years ago. Ronnie and Jimmy Bain wrote this song and it is an incredible piece of art. You can never deny the power of a great song because it always withstands the test of time. Even when artists redo great songs, and even though their personal stamp is on it and folks may not necessarily like that version…the greatness of the song and the original writers never diminishes.

I hope that we did the spirit of Ronnie proud by doing this because our intention was always honest and true. That’s why we wanted to donate 100% of the proceeds to Diocancerfund.org It’s all for the love of RJD, his music and this charity. We wanted to support Wendy and the SUAS cancer fund and it’s an honor and privilege to have the full support and endorsement of Wendy Dio and the SUAS Board of directors behind us! 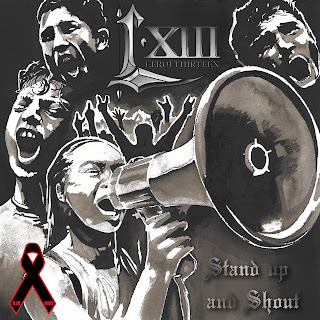 CV: Do you feel there is an artist today who comes close to a modern day version of Dio in your opinion? If so, who do you believe that would be?
TLR: I really don’t feel there is one. Ronnie James Dio was unique and a one of a kind!

CV: A band can be defined by many things and in a number of ways: sound, look, style, attitude.... Describe LeRoi XIII's music using only three words then tell us why you chose those three specifics words?
TLR: We are in the early stages of development but we aspire to be:

I think those are 3 key adjectives to describe this project...and how I’d like to see it described

CV: With the world still stuck in a COVID state, how does a newer band entice music sales, especially for an album or single, without being able to perform live and personally be able to bring the music to the people? Can an audience still be persuaded to purchase without the option of seeing the band live?
TLR: It certainly is a challenge but the internet makes it possible. It’s an incredible platform that has infinite possibilities to bring awareness to a band. I believe if a band creates great songs and their intention is honest and true, the people feel that and believe in it. You can try to pawn off lack luster art and music...but true metal fans see right through that!

CV: Does music create a unique way of communicating in your opinion? Can music really make people stand up and shout and take action...does music speak louder than words?
TLR: Music transcends all barriers! It’s the common thread that can bring people together regardless of differences. It has the power to transform lives and inspire true change...its spiritual power and magic are timeless!

CV: What's next? In addition to the new "Stand Up and Shout" single, what can fans expect to see coming from LeRoi XIII in the remainder of 2020 and beyond?
TLR: We had so much fun recording this track and working together that we have decided to continue forward. You can absolutely count on more music from LeRoi XIII. We did an interview with Matt Pinfield that’s on YouTube and he asked us the same thing. All the guys responded that they were stoked to make more music together.

It was truly a privilege to work with these world class musicians; Will Hunt & Troy McLawhorn (Evanescence) Aaron Pauley (Of Mice & Men) and Sammy Boller

CV: Thank you Terry again for spending some time talking and sharing with our readers. I wish you all the best and continued success.
TLR: Thank you Mick as well we appreciate You and all you do to keep metal alive!!