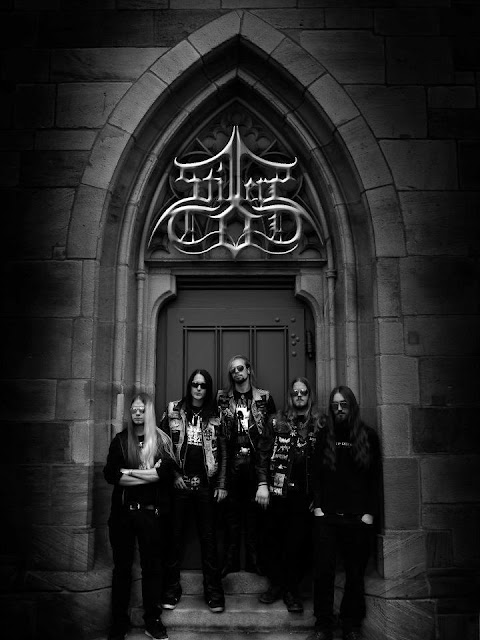 COSMICK VIEW: Hello, Kargáist! Welcome to The Cosmick View. Thank you for taking some time out of your day to chat with me, it's greatly appreciated.

CV: Do you feel Heavy Metal music in general is viewed differently by fans in Europe compared to fans elsewhere, especially in America, and if so why?
Kargáist: Interesting question, but hard to say since I don't know many people from the US. But I have the feeling that Metal music is a little bit more part of the mainstream here in Europe, especially in Germany and, of course, in Scandinavia. I also wonder if Metal music in the states can still have the potential to be as polarizing as in the 80s since Christian fundamentalists…who could have a problem with the anti-authoritarian sex-drugs-Satan-image, are much stronger in the USA than they are here.

CV: What do you feel makes Heavy Metal music so alluring to the fans? What is it about the music that personally resonates so strongly with you?
Kargáist: I think that the aggressive tone of Heavy Metal helps us to let out strong feelings like hate, anger and sorrow; it also gives a feeling of strength, what is very helpful in a world where many people often feel helpless and defenseless.

But besides the music, there is also the above-mentioned anti-authoritarian image: Heavy Metal once was the soundtrack of rebellion against parents, teachers, police, the rich class, big corporations, conservative thinking, religious leaders and the government. That's what Heavy Metal still means to me and what it maybe still makes alluring to many people; although I feel that the Metal scene has lost nearly everything of the rebellious spirit it had in the 70s and 80s. It became very conservative and apolitical, what really annoys me.

CV: Has Metal splintered into too many sub-genres in your opinion, thus, making it harder for newer bands to actually classify themselves as one style over another?  Is it confusing for fans as well?
Kargáist: I don't think that there can be something like too many sub-genres. If a genre splinters up, it's just a sign that the genre is alive. It evolves further and further and I'm thrilled to see what sub-genres will exist in ten years.

CV: How would you describe the current state of the music business considering we are now living in a COVID aware, and maybe even feared world? Have things drastically changed long-term for artists and bands given the recent pandemic? What are your thoughts?
Kargáist: Of course it's a horrible situation for bands and all the people who work in the live industry such as roadies or sound engineers. But I believe that the Metal scene can benefit in a creative way from this situation: Metal was always music about fear and pain in a menacing world. Insecurity and crisis have always been the creative fuel for this kind of music. As I mentioned before, Metal became conservative and apolitical in the recent decades and I think the reason is that most of the Metal musicians are privileged people living in rich, safe countries. But now we are faced with a crisis that appears as if it came right out of some dystopian Metal lyrics into our world…I guess that this will have a huge impact in the way Metal musicians put their thoughts and feelings into music and actions.

CV: What do you feel makes your band and its particular approach to songwriting work? What keeps the band together and making music?
And on a more global view, how do you see your band’s music and songwriting separating itself from just being another Heavy Metal act?
Kargáist: I feel that our songwriting is just weird and that's awesome, haha! Our songs are complex constructs full of experiments and untypical genre influences such as Portuguese Folk Music or Classical. And that's the reason why we always continue making music: We want more experiments, more unusual ideas; we want to go further and discover always new areas of musical possibilities.

CV: Are there life lessons to learn being in a Heavy Metal band that you feel cannot be taught elsewhere? If so, what are they?
Kargáist: When I was younger I was obsessed about becoming famous with my music. But I have learned that the pleasure of working together with other people on creative music and touch other people's feelings with my creations is more important than being known by many people.

CV: What do you feel makes someone a “rock star”? Does being a rock star automatically make one iconic or are the two completely different in your opinion?
Kargáist: I think it's the opposite way: You have to be an iconic person to become a rock star. Look at Lemmy: Playing ear-crushing Rock 'n Roll music wouldn't have been enough to make him a legend. He became a legend because he was this stubborn, black-humoured, well-read, rebellious, hard-drinking sex addict we all love. It wouldn't have worked if he had been just some average guy…he had to be this iconic person to become a rock star.

CV: What's next for you? What can fans expect to see coming as the world looks to surmount a new normal laced with a load of restrictions?
Kargáist: We're currently working on a new split album that will maybe feature guest appearances of some more well-known musicians. It will be a concept album and the first time our lyrics will focus on political issues such as the root of authoritarian thinking and racist ideologies.

CV: Thank you again Kargáist for spending some time talking and sharing with our readers. It was a pleasure. I wish you all the best and continued success.
Kargáist: Thank you too, it was also a pleasure for us!