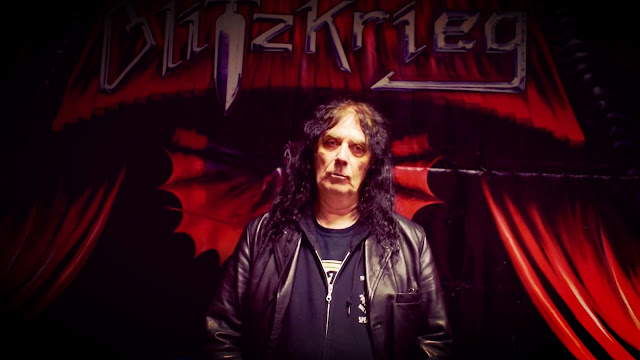 
COSMICK VIEW: Hello, Brian! Welcome to The Cosmick View. Thank you for taking some time out of your day to chat with me. It’s greatly appreciated.
Brian Ross: My pleasure, no problem at all.
CV: Do you feel that it is possible today for a band to be plucked out of obscurity, much in the way Blitzkrieg was back in the 80s, or has the internet and social media changed the game?
BR: I don’t know. In some ways, I think that it is easier to be “seen”, because of the internet, but it can also be harder because there are so many bands to choose from, so it’s easy to get lost in the crowd. I also think that social media has made it possible to contact your favorite bands, which can be a good thing. Having said that, I am not a fan of downloads and the like. I like to have a physical copy of an album that I like.
CV: Do you feel that given the accessibility and social awareness in modern times, that a music underground today still even exists as it once did?
BR: Did the music underground ever really exist. Was it not just a “label” invented for some purpose. There is just music, good and bad. People support the bands they like. Hopefully this will continue.

CV: What do you see as the biggest difference in Heavy Metal from back then to now? How has the genre evolved from your point of view?
BR: There is no doubt that the genre has evolved. Some of it good, some of it bad, but there is one thing that is sure, and that is that Heavy Rock/Metal will continue for a very long time to come.
CV: With over 40 years on the music scene, was Blitzkrieg ever aware of the impact it was having on the yet still fresh-faced NWOBHM genre way back when?
BR: By the time we realized the impact that we had had, we were gone and had moved on. Sometimes I wonder what would have happened if BLITZKRIEG had signed the contract that we had been offered by Carrere Records and gone out on tour with SAXON, instead of splitting up in 1981. I guess we will never know. 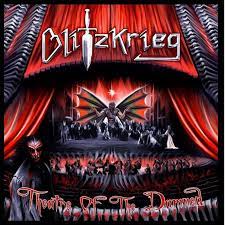 CV: “Theatre of the Damned” is getting a new, deluxe vinyl edition, consisting of three, limited run, distinct vinyl color releases as well as on CD. What sorts of emotions surface as the band revisits an earlier album? Is it as nostalgic for you as for the fans? Or have past accomplishments taken on different sentiment over time for you?
BR: I am very happy that “Theatre of the Damned” is being re-issued. It is a piece of the band’s history and the guys in the band now are just as happy about it as the musicians who played on it.
CV: Are there any other titles in the Blitzkrieg catalog you are hoping to give a deluxe reissue to sometime in the future?
BR: If it was up to me, I would do them all. Who knows what may or may not happen.
CV: Hindsight is 20/20 they say, often giving us perspective and clarity. Looking back now, would there be anything different you would have done over your career? Or is it a matter of leaving well enough alone…”it is what it is, just move on?”
BR: Possibly, but realistically, it is what it is. If I ever get my hands on a Tardis and I’m able to travel back in time…………maybe.
CV: The World has been rocked by the COVID pandemic. The economy has been sent into a tail spin in its wake, unfortunately.  Bands worldwide have been restricted in performing live and for some it seems, restricted from earning a living. How has the pandemic affected Blitzkrieg? Are you hopeful that as 2021 progresses will see many of the restrictions lifted?
BR: I have a condition called COPD and although I did test positive with COVID-19, I had no COVID symptoms. COVID did, however, make my COPD worse and I am still having problems. We have returned to rehearsals and at first, my voice was very weak. It is getting stronger though, as the weeks go by. I just want to get back to playing live, as I’m sure all bands do.
CV: What do you feel, artists and bands can do right now to stay relevant. Especially in an environment,  such as the present, where performing in front of a live audience is being restricted? What immediate options do you see available?
BR: All we can do, is wait until we can undertake touring again.
CV: As a band, what has been learned from the events of 2020? Are those lessons learned, different for you as an individual,  or are they one and the same in your opinion?
BR: Nothing can be taken for granted. The World has been brought to a virtual standstill. I’m sure that there are lessons to be learned, but will they actually be implemented.

CV: In addition to the deluxe issue of “Theatre of the Damned” in June, what more can fans expect to see coming from Blitzkrieg in 2021?
BR: When we are back “up to speed”, we will continental writing a new BLITZKRIEG album, and all being well, we will go out on tour as much as we are able.
CV: Thank you again Brian for spending some time talking and sharing with our readers. It was such a pleasure. I wish you all the best.
BR: No problem, it was a blast.
Check out Blitzkrieg at:
Official site
Facebook
Instagram
Spotify
Like The Cosmick View on Facebook at:
www.facebook.com/TheCosmickView