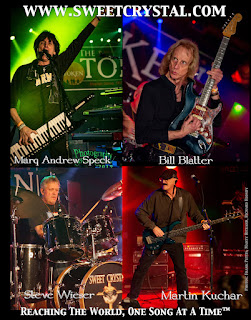 Next is social media. What today’s musician has is an entire world that can be accessed, a gateway to distribute and promote their masterpieces in ways and speeds totally unheard of when Sweet Crystal started out…but that also means there is a continual flood of music being produced and released every single minute of the day and getting your music heard above that roar… daunting to say the least.
CV: How would you describe the difference between an artist who follows trends and one who sets them?
MAS: Besides being a 24 time Detroit Music Award winning band, two of the more interesting aspects of Sweet Crystal are our longevity and our staying true to our musical styling. The three of us founding members have been playing together for over 45 years and to this day, we don’t “chase” current trends in mainstream music but stay true to our progressive arena rock beginnings. The songs are new and fresh but the sound remains classic Crystal, which our fans appreciate. Artists that ‘chase’ trends are already falling behind. You can copy but you can never catch up so set your own individual course. That way, you will always be in the lead of your own musical race.
CV: Has music overall been splintered into too many sub-genres in an effort to appease fan tastes in your opinion? And has such fan appeasements, in actuality, weakened music’s impact as a whole by dividing audiences?
MAS: We don’t think so – sub-genres are just labels that can help a fan find new artists in the same musical veins that they already like. No one likes to be ‘pigeon-holed’ into a specific musical box, but sometimes it will be that label that will intrigue a new listener to at least give an artist a listen.
CV: What can fans expect to see coming next from you?
MAS: New songs already being recorded for our next release ‘8’, this time around featuring more lead vocals from Bill. We have a new promotion company (Rogue PR) taking the reins for a while to get the Sweet Crystal brand into more markets. Booking shows and benefit concerts to play again as we all get back to normal.
Basically we plan to remain exactly who we are for as long as can…because if it ain’t broke…
CV: Thanks again for taking some time and talking. It is greatly appreciated.
Check out Sweet Crystal at:
Official: www.sweetcrystal.com
Facebook: www.facebook.com/SweetCrystalBand
Youtube: www.youtube.com/c/SweetCrystal
Soundcloud: https://soundcloud.com/sweet_crystal
Reverbnation: www.reverbnation.com/sweetcrystal
Spotify: http://tinyurl.com/y76vcpqg
Bandcamp: https://sweetcrystal.bandcamp.com
Twitter: www.twitter.com/sweet_crystal